It’s been a good few months since I last did a Down the TBR Hole post, but January seems like the perfect time to start again!

The last night of the year. Now the days of winter begin and the Goblin King rides abroad, searching for his bride…

All her life, Liesl has heard tales of the beautiful, dangerous Goblin King. They’ve enraptured her mind, her spirit, and inspired her musical compositions. Now eighteen and helping to run her family’s inn, Liesl can’t help but feel that her musical dreams and childhood fantasies are slipping away.

But when her own sister is taken by the Goblin King, Liesl has no choice but to journey to the Underground to save her. Drawn to the strange, captivating world she finds—and the mysterious man who rules it—she soon faces an impossible decision. And with time and the old laws working against her, Liesl must discover who she truly is before her fate is sealed.

I’ve had this on my TBR since it was released. Goblins aren’t what I would call my thing, but then I can’t say I’ve ever come across many books with goblins in before that didn’t work in Gringotts so maybe I’ve misjudged them. It’s had a lot of great reviews, and although I probably won’t read it anytime soon, for now I’ll KEEP.

The Bigness of the World by Lori Ostlund

In Lori Ostlund’s debut collection people seeking escape from situations at home venture out into a world that they find is just as complicated and troubled as the one they left behind.In prose highlighted by both satire and poignant observation, Ostlund offers characters that represent a different sort of everyman—men and women who poke fun at ideological rigidity while holding fast to good grammar and manners, people seeking connections in a world that seems increasingly foreign. In “Upon Completion of Baldness” a young woman shaves her head for a part in a movie in Hong Kong that will help her escape life with her lover in Albuquerque. The precocious narrator of “All Boy” finds comfort when he is locked in a closet by a babysitter. In “Dr. Deneau’s Punishment” a math teacher leaving New York for Minnesota as a means of punishing himself engages in an unsettling method of discipline. A lesbian couple whose relationship is disintegrating flees to the Moroccan desert in “The Children beneath the Seat.” And in “Idyllic Little Bali” a group of Americans gathers around a pool in Java to discuss their brushes with fame and ends up witnessing a man’s fatal flight from his wife.

In the eleven stories in The Bigness of the World we see that wherever you are in the world, where you came from is never far away.

I can’t remember putting this on my Goodreads TBR. I’m a bit of a magpie when it comes to short story collections. I just add them to the list without really thinking about them. Reading the blurb though, I can’t say I’m particularly intrigued by this collection. GO.

The Realm of Possibility by David Levithan

There’s the girl who is in love with Holden Caulfield. The boy who wants to be strong who falls for the girl who’s convinced she needs to be weak. The girl who writes love songs for a girl she can’t have. The two boys teetering on the brink of their first anniversary. And everyone in between.

As he did in the highly acclaimed Boy Meets Boy, David Levithan gives us a world of unforgettable voices that readers will want to visit again and again. It’s the realm of possibility open to us all – where love, joy, and the stories we tell will linger.

I don’t think I’ve read any David Levithan, except Will Grayson, Will Grayson which was co-written with John Green, so I feel like that doesn’t really count. It sounds like a nice YA, and I’m up for that. KEEP

The Forbidden Wish by Jessica Khoury

When Aladdin discovers Zahra’s jinni lamp, Zahra is thrust back into a world she hasn’t seen in hundreds of years—a world where magic is forbidden and Zahra’s very existence is illegal. She must disguise herself to stay alive, using ancient shape-shifting magic, until her new master has selected his three wishes.

But when the King of the Jinn offers Zahra a chance to be free of her lamp forever, she seizes the opportunity—only to discover she is falling in love with Aladdin. When saving herself means betraying him, Zahra must decide once and for all: is winning her freedom worth losing her heart?

As time unravels and her enemies close in, Zahra finds herself suspended between danger and desire in this dazzling retelling of Aladdin from acclaimed author Jessica Khoury.

Who doesn’t love a retelling? There probably are some naysayers around, but I for one am all for them. A good re-telling can add a new slant to a well known tale. A romance between Aladdin and the Jinn in the lamp? I am all for that. KEEP.

The Age of Magic by Ben Okri 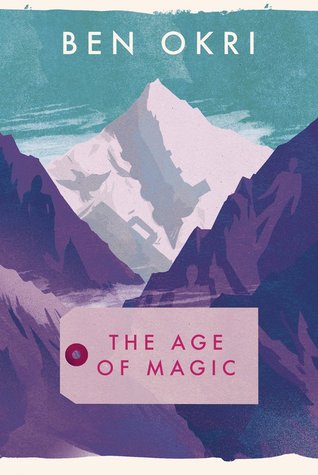 This novel takes us on a journey, a magical, and a literal one. A tightly knit group of filmmakers travel from Paris together to make a documentary. Unknown to themselves they carry a lot of unwanted baggage – fear, anger, jealousy, love.

When they arrive in an idyllic Swiss village ringed by mountains and reflected in a lake, they discover a haunted world that will compel them to confront the demons they have been trying to escape.

Ben Okri is another author I haven’t read. I like the sound of this novel- filmmakers in a Swiss village, existential crisis – why wouldn’t you read it? KEEP.

So, one book gone! For me that’s actually pretty good!