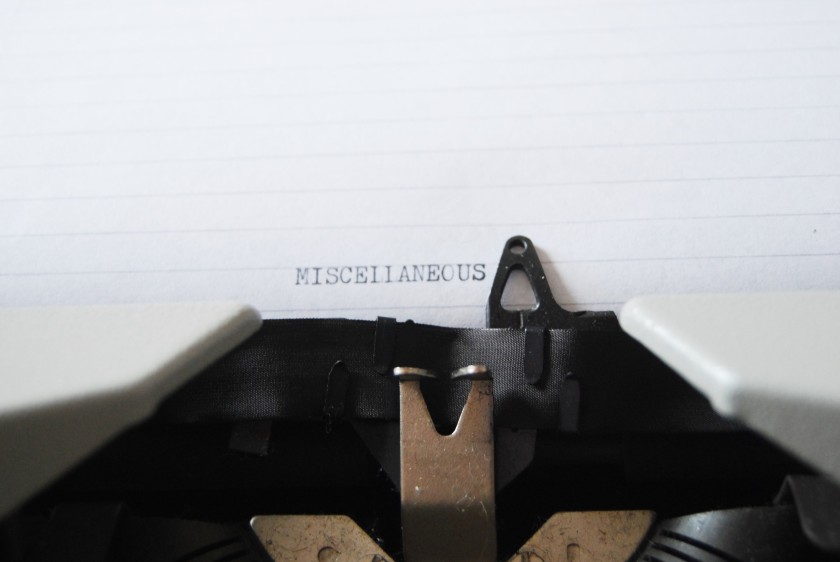 Bright Star is one of my favourite films in the world. Directed by Jane Campion, it follows the intense but fleeting love story of poet John Keats and Fanny Brawne. The cinematography in this film is absolutely beautiful. In one scene, a lovesick Fanny and her younger sister collect butterflies and have then fluttering around their bedroom. In another, Keats climbs up a tree and rests on the top branches, sun-soaked. Basically, I just love the whole film in it’s entirety. It’s hard not to. Abbie Cornish and Ben Whishaw play the lead roles to perfection. And yes, anyone who knows me will know I’m completely biased because of my love of Ben Whishaw, but this is the film that caused it. There’s a real sense of passion, of deep-seated emotion and at the end of the film, I always find myself sharing in Fanny’s loss. I can’t quite manage to keep my eyes dry.

I watched Capote recently at the recommendation of my sister. At first I was a little reluctant, mainly because our household has gotten into watching a lot of true crime drama/ films based on real life, and I like the happy films where everything ends well. But I have to say, Phillip Seymour Hoffman blew me away. Of all the actors in the films listed, he is the one I would immediately say stood out. He was completely committed to the role, almost unrecognisable as Truman Capote. It was a captivating watch.

The film relates Truman Capote’s journey to create his most famous work In Cold Blood, a true crime novel concerning the murders of the Herbert Clutter family and the subsequents arrests of Richard Hicock and Perry Smith. Through writing the book, he develops a complex relationship with Smith. Despite the book’s success, Capote struggles to distance himself from the convict and the case, and Hoffman captures that beautifully.

Ginsberg, Burroughs, Kerouac are all well-known names thanks to their revoluntionary contribution to literature. I knew about the Beat Generation before I watched the film, had Kerouac’s On The Road waiting on a bookshelf and had watched half of  Howl the biopic of Ginsberg’s life, but I hadn’t heard of Lucien Carr, or his involvement in bringing these writers together.

There’s been a lot of dispute over how truthful the events depicted in the film are, but when any true event is dramatised you have to be able to take it all with a pinch of salt. Kill Your Darlings depicts Ginsberg’s college life, his friendship will Carr, Kerouac and Burroughs, and the consequent murder of David Kammerer in 1944.

Dane Dehaan and Daniel Radcliffe are brilliant in their roles as Carr and Ginsberg, and whether or not the relationship between them is true, it is certainly powerful and evocative.

I’ve had a growing infatuation with Sylvia Plath ever since I read The Bell Jar at the start of this year. I found this film not long afterwards. It opens in 1956, the year Plath meets fellow poet Ted Hughes at university, and follows their tempestuous relationship until her tragic suicide in 1963. There is some really wondeful scenery in this film, that acts as a poignant backdrop to Plath’s gradually deterioration, and Gwyneth Paltrow excellently conveys Plath’s troubled mental state.

My only issue is that time jumps continuosly through the movie. We lose months at a time and, although we see fragments of their early relationship, it would have been so much more satisfying to settle into the scene and get a true sense of Plath and Hughes together, because it gets lost in the time-hopping void and its a story that deserves attention.

Anyone who knows me a little will probably know about my unconditional love of Jane Austen. I think I’ve already mentioned it on this blog more than enough times already, but its hard to reign in my enthusiasm. If I’m honest I don’t try that hard to keep it under lock and key. Sometimes I just blurt it out in literary related conversations. It happens. So naturally any film about her life would be a hit with me. I’m not very good at removing my personal feelings when talking about films, so it’s lucky I’m not a film critic.

Becoming Jane focuses on Austen’s early life, specifically her acquitance with Tom Lefroy and their fleeting romance. I think their relationship has been exaggerated to some extent for the purposes of the film, but it’s enjoyable. No one could ever quite capture the charisma of Jane Austen (in my opinion) but Anne Hathaway plays the role brilliantly. I always feel a little sad that Austen never had the ending  her heroines had, but when I think about it, I realise that maybe she didn’t want to either.